Sometimes there is a bit of serendipity in my reading and learning. This morning, Tim Stahmer’s post about data mining became a catalyst for that serendipity. He used this photo of the Hope-Katy Mine in Basin, Montana from Wikimedia Commons as a metaphor and mentioned not knowing what might have been mined there. With my new found interest in US geology ala John McPhee, 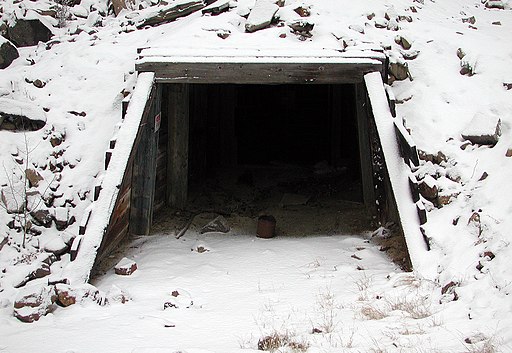 I went out to look and discovered it was gold and silver as they were the two most valuable ores found in the area.

The rich veins formed after molten rock came to the surface, turned into granite that cracked as it cooled, which allowed for the gold and silver to fill in. And all this happened some 81 to 74 million years ago. Geological history is a bit overwhelming at best.

More recent history in the West also fascinates me. The history of Basin, Montana, is one that repeated itself in towns across the West as miners and companies came and went, got out all but the impossible ore, and moved on, creating waves of boom and bust. But, Basin has reinvented itself somewhat as a health town, encouraging people to descend into the Merry Widow Health Mine to inhale radon and drink the pure spring water to cure a whole host of ailments.

In addition to McPhee, my 2020 reading included Tim Egan’s The Big Burn, his history of the 1910 wildfire that burned large sections of Idaho and Montana, destroying several railroad towns. Firefighters fought a losing battle but stories of heroism were born. And here is where this thread connects to the last: a US Forest Service ranger Ed Pulaski saved most of his crew by escaping into an abandoned mine, near Wallace, Idaho, which was partially destroyed in the fire.

Earlier, in the late 1800s, Wallace had been the site of a union strike that led to the wider Coeur d’Alene labor strike. And that ends this journey with my current read: The Women of the Copper Country, which tells the fictionalized story of Anna Clemenc and her labor activism during the Copper County, Michigan, strike in 1913 – 1914.

Geology, history, literature, biography: all these threads come together around the stories of the landscape and its people.

Welcome to my little corner of the web. A spot to think out loud about the world. I write about my work and play, about the overlap between them, and my sometimes struggles in finding the balance.

I am a teacher and learner with the goal of making more meaningful online connections in the coming year.

In Another Place Blog by Karen Richardson is licensed under a Creative Commons Attribution-NonCommercial-ShareAlike 4.0 International License.